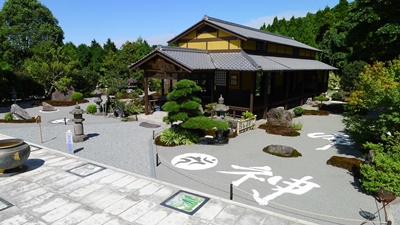 ・Buddhist images in the Shakyodojo 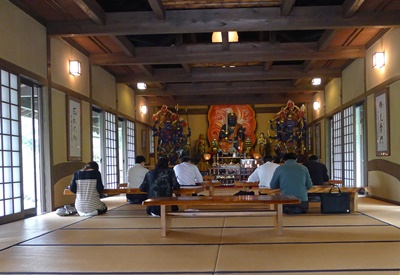 Greatly differing from a favor of depth of Kondo, Shakyodojo was constructed with a quaint appearance associated with an image of traditional Japanese structures.
The atmosphere, with decorative windows on the front, 太鼓柱(Taiko-bashira) implanted in the side walls and fumed bamboo put on the ceiling produce, drive us to become retrospective and feel like sitting inside as long as possible. Kondo can be described as feminine.
写経(Shakyo) is considered a religious practice or a spiritual discipline. In that sense, Shakyo-dojo was built for people to repent for their sins and build merits through Shakyo.
When we look around the surrounding gardens and practice Shakyo in a calm mood, our 六根(Rokkon) : eyes, ears, nose, tongue, body and soul are cleaned. Shakyo is not only a work to transcribe Hannyashingyo but, we elevate our concentration and write each character from the bottom of heart, also to purify each part of our Rokkon and approach the state of Buddha. Sometimes even our wishes come true after continuous practice of Shakyo.
In short, Shakyo brings merits for us to transform our miscellaneous desires into Bodaishin(soul that we pursue an enlightment). So it is important to practice Shakyo, as a fundamental method of merit building, both at home as a part of Kagyo-no-gyo and inside a temple.
Inside the Shakyo-dojo, besides Shakyo, 護摩供(Gomaku) takes place on the 28th of each month at 11 o'clock in the morning, where a priest puts a 護摩木(Gomagi) on which we write our wishes into a fire and prays for the fulfillment of our wishes.